Coming March 9th this year, Drill Deal – Oil Tycoon, a new economic strategy in which the player manages a drilling platform and builds a mining empire, will make its debut on PC. The title features such things as varied gameplay, a humorous climate and charming voxel graphics. In the next few months, Drill Deal – Oil Tycoon is also due to be released on PlayStation 4, PlayStation 5, Xbox One, Xbox Series X/S and Nintendo Switch.

Drill Deal – Oil Tycoon was created by the Polish studio A2 Softworks, which is known for such games as Gatewalkers, a cooperative action RPG. The publishers of the title for PC are Manager Games S.A. and Red Dev Studio S.A.

In their new game, the A2 Softworks team combined economic strategy, simulation and base building. Drill Deal – Oil Tycoon is distinguished by voxel graphics, a humorous atmosphere and varied gameplay. The game allows you to build and develop a drilling platform and extract raw materials while tackling a variety of challenges and threats. The player must take into account many things, including the development of new technologies, employee management, crisis response and the need to take care of a whole range of other factors.

Back in mid-2020, free mission Drill Deal: Borehole (Alpha) was launched on PC and it was very well received by players (86% of positive reviews on the Steam platform). The creators indicate that the title has been significantly improved and expanded since then.

“In the final version of Drill Deal – Oil Tycoon we have prepared a total of 8 different story scenarios with unique locations, tasks and challenges. And there’s also a sandbox mode, where there are virtually no restrictions. Now the game also offers a lot of new events – sometimes pirates can attack us, you will have to face kraken, there may be an earthquake and many other random events” says the CEO of A2 Softworks, Andrzej Stroiński.

“Drill Deal – Oil Tycoon is a charming economic strategy where individual solutions are well thought out and together create an engaging, creative and unique whole. This title will appeal to fans of productions such as Two Point Hospital, Buoyancy, Factory Town, Prison Architect or Timberborn. Our new tycoon is also heading for consoles. Work on these versions is already well advanced” adds the CEO of Manager Games S.A., Tomasz Sobiecki.

The release date of Drill Deal – Oil Tycoon on PC (Steam) was set for March 9, 2022. Over the next few months, the title is also due to be released on PlayStation 4, PlayStation 5, Xbox One, Xbox Series X/S and Nintendo Switch. 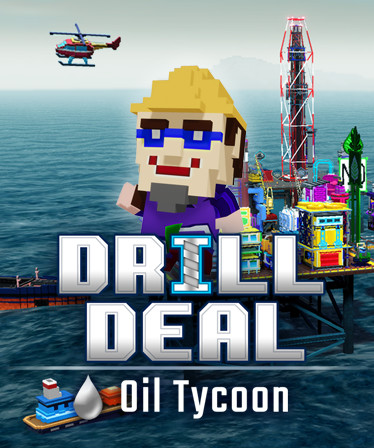